Miss Salad and Her Trousseau 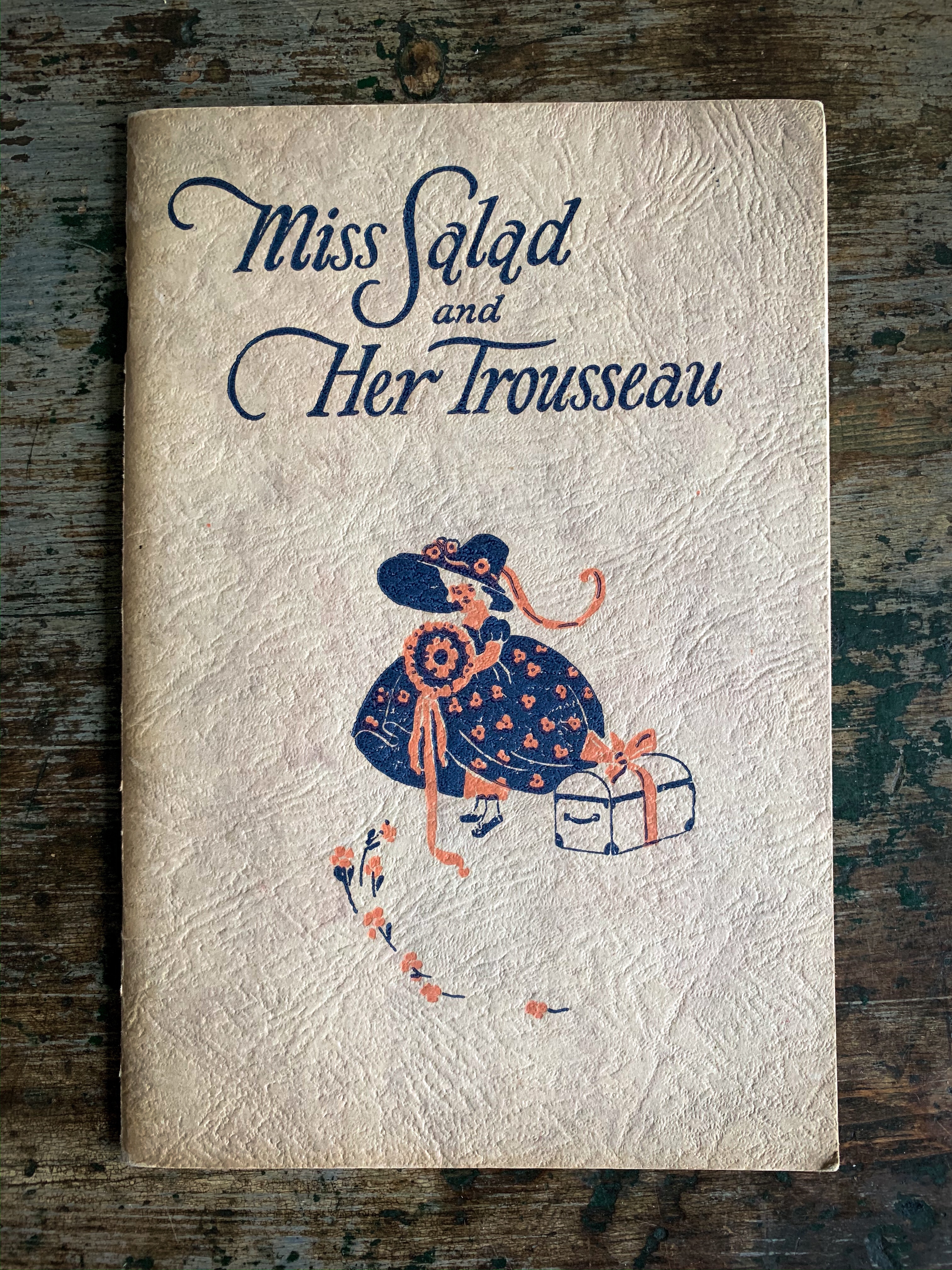 Today we are looking at this 1925 publication from America, written by Emma Jane Quick and published by W.B. Howell & Co. in Waterloo, Iowa.

The book, as its title suggests, is devoted to salads, and in alphabetical order, we are given recipes for nearly one hundred types, both savoury and sweet, followed by instructions on how to make all manner of dressings. Interspersed amongst the recipes are various advertisements for local businesses. In the frontispiece we are sternly advised “This book was made possible by our advertisers. Let us show our appreciation by patronizing them”.

The thing that strikes me from the outset is the quantity of recipes given for salads that are encased in jelly – (that’s Jell-O if you are from over the pond). I was aware that Jell-O has always been popular with the Mormon community (the Mormon Corridor being nicknamed the Jell-O Belt) however, those Iowans clearly loved it too, and apparently it’s a passion that hasn’t waned as it still enjoys a starring role in many a local cookbook. It even has its own competition in the annual Iowa State Fair.

Anyway, at the time this book was published, congealed salads were all the rage. Usually lemon or lime flavoured Jell-O was favoured for such purposes, however, so popular did the jelly salad become, that Jell-O went on to manufacture flavours such as cabbage, celery and green pepper. Sadly these are no longer in existence, so we can only imagine how they tasted!

One practical reason for encasing foods in jelly is that in the days when refrigerators were not yet commonplace, it was a great way of preserving foods and I have to say that in the recipes I tried, it was notable how fresh and crunchy the ingredients remained under their jelly coating.

It is interesting to see how blurred the line is between sweet and savoury in many of these recipes. We frequently encounter savoury salads with sweet dressings (the marshmallow being a frequent addition) and we also have many a sweet salad with a savoury dressing. The author stresses how important it is that the salads are visually pleasing too. “Arrange tastefully” we are instructed, on more than one occasion. Throughout the book there is lots of garnishing and arranging to be done. Apples and tomatoes are scooped out and filled with mixture, rings of green and red peppers are caught together in chains, beets are sliced and cut into fancy shapes, eggs are fashioned to look like daisies and celery is curled into ribbons, to name but a few of the recommended embellishments.

I thought I would go in at the deep end. This to me is the stuff of nightmares. Personally I loathe beetroot and am heartily of the belief that peas are never acceptable in a salad. So yes, I made this purely because the prospect of it appalled me.

Soak 1 tablespoon of granulated gelatine in ¼ cup of cold water and dissolve in 1 cup boiling water. Then add ¼ cup each of sugar and vinegar, 2 tablespoons of lemon juice and 1 teaspoon salt. Strain, cool, and when beginning to stiffen add 1 cup celery cut in small strips, ½ cup shredded cabbage, ¼ cup of cold cooked green peas and ¼ cup of cold cooked diced beets. Turn into a mold and chill.

I mean, just look at it. I really did have to brace myself to taste this. However, once you get past the ghastly texture and squelching sound as you plunge your fork in, it is not nearly as awful as one might expect. I’m not saying I’ll ever prepare this again, but it really wasn’t half as bad as it looks, and it’s possible some people may even actively like it!!

Onwards to pastures more pleasant, we hope. I picked this as I was intrigued to see what the addition of ginger ale would bring to a fruit salad. I left the nuts out as I am not keen on them in a jelly.

Mr M was enthusiastic. Even more so when double cream was offered as an accompaniment. And I can confirm it was pretty agreeable; the ginger came through nicely, but did not overpower and the fruit was chilly, crunchy and refreshing.

Back to savoury. Having been surprisingly untraumatised by the reality of the jellied vegetable salad, I though I would try another one.

Grate enough cucumber to fill one cup. Add two tablespoonfuls vinegar and a pinch of salt. Dissolve a package of Lemon Jell-O in one-half pint boiling water. When cool and it begins to thicken, add cucumber mixture, press through a sieve, add a few drops of green colouring and turn into a pan. When firm cut in squares. Served on sliced cucumbers or lettuce. Fine with fish.

I didn’t have any lemon flavoured Jell-O to hand so made some from scratch and I think this helped considerably with the final outcome, as it turned out to be less sweet than the packet variety would have been. I also declined the recipe’s advice to add green food colouring. It all turned out to be rather good. Cool, crunchy, slightly tangy, lemony cucumber which went beautifully with with a baked salmon fillet for a healthy, low-fat dinner.

This recipe puzzled me. I wasn’t sure if it was supposed to be a sweet or a savoury item. The syrup is made with sugar and vinegar and to serve, each apple half is filled with mayonnaise and then topped with a layer of double cream.

1½ cups vinegar, 3 cups water, 24 cloves, 1 stick cinnamon, 24 allspice, 2 cups sugar. Put vinegar on to boil with cloves, cinnamon, allspice and sugar, and cook until it forms a syrup. Core and peel apples, cut in halves and cook in spiced vinegar until tender. Remove from syrup and cool. Put mayonnaise in center of apples, then whipped cream and English walnuts on top of the cream.

Result? Mayonnaise topped with double cream is not OK. This recipe was neither sweet enough to be put into the pudding category, nor savoury enough to be served with mayonnaise. However, without any unnecessary adornments, I do feel these would go rather well as an accompaniment to cold meats at Christmas time.

A very attractive and appetising addition to any fruit salad are these little cheese carrots. Moisten one white cream cheese with cream or top-milk. Mold into shape of tiny carrots. Roll until well covered, in paprika. Insert a wee spring of parsley at broad end.

These little carrots were rather fiddly to make, but I think you’ll agree they do look rather sweet. However, the fact that the recipe states they are an appetising addition to any fruit salad blows my mind!! To be honest, I’m not sure what salad they would actually go with. The quantity of paprika required to cover them means that the flavour is unpleasantly overpowering!

Cut fine equal parts of oranges and sweet Bermuda onions and cover with mayonnaise dressing. Nuts, apples and other fruit may be added as desired.

We have two strong flavours competing with each other here. I went a lot lighter with the raw onions than suggested in the recipe, as in large quantities I am not a particular fan. Mr M and I both agreed that this was a surprisingly good combination. We managed to scoff the whole plate whilst contemplating what we might serve it with. But never actually came to any conclusions about what we might serve it with. Seafood perhaps?

This was the final recipe I tried and it turned out to be a prime example of how very well sweet and savoury can work together.

Place half a canned pear on a lettuce leaf on each dish. Fill cavity with dressing and garnish with pimentos cut in small strips.

And lastly, please note, a recipe for a different type of salad, planted inconspicuously amongst the dressings…..