Fare-Ye-Well with Ladies of the Realm 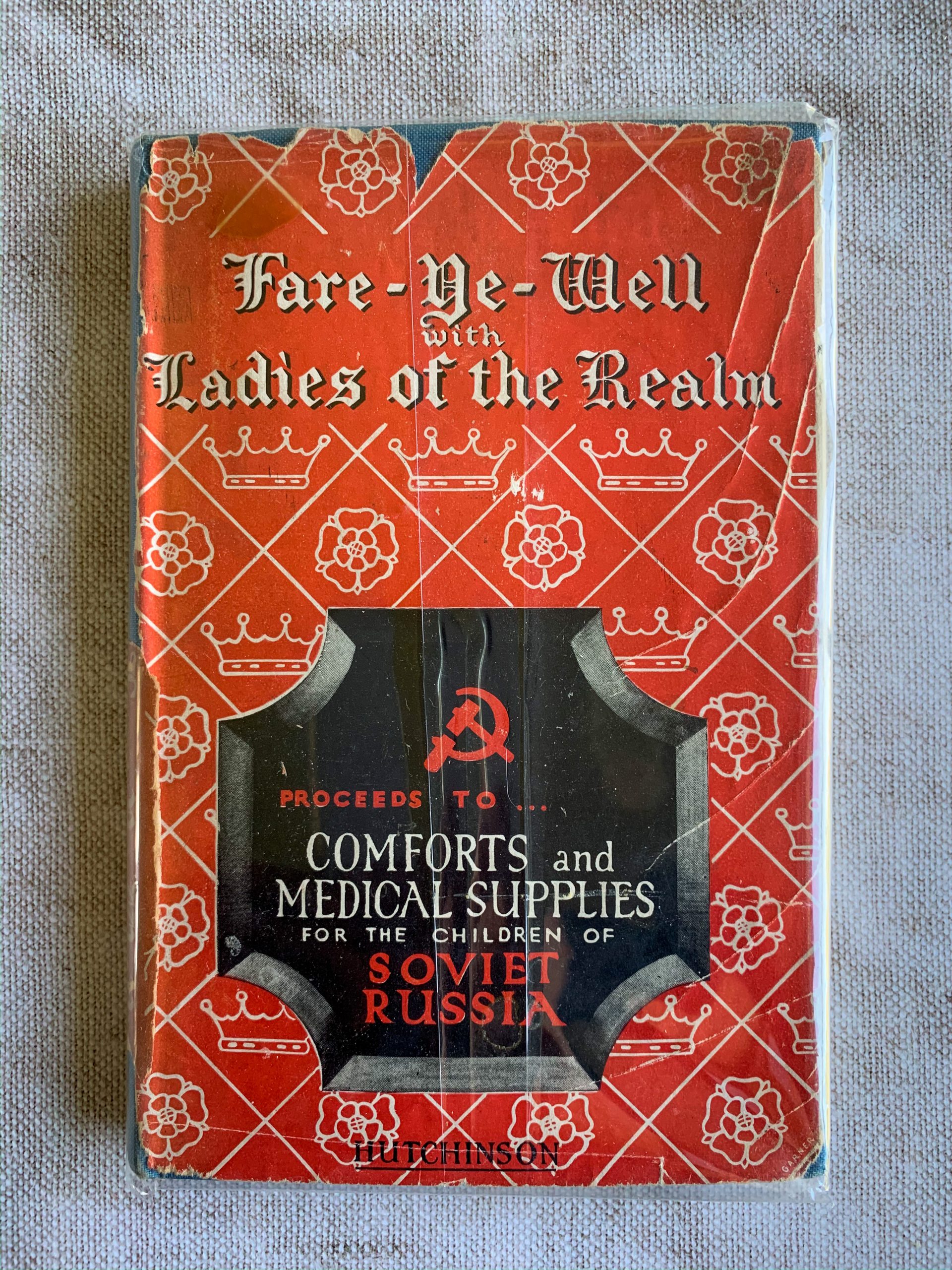 Published in 1944 by Hutchinson & Co. Ltd. and compiled by Madeleine, Countess of Effingham, Fare-Ye-Well with Ladies of the Realm is a collection of recipes contributed by notable women of the time, “… either well known in their own name, or wife of a prominent man”.

This book is an absolute gem. Not for its recipes though (which painfully reflect the lack of ingredients available at the time) so much as for the photographs and biographical notes on each of its contributors. As Countess Effingham points out, “This is more than just a cookery book; it is an interesting souvenir of wartime England, valuable for the kitchen and informative for the library”. Contained within are contributions from some forty women representing Politics, the Military and the Arts.

The entire proceeds from the sales of the book are, we are told, to be devoted to sending clothes and medical supplies to the women and children of Soviet Russia. In her introduction, Countess Effingham reminds the readers of how, in spite of their own current hardships, they must support the Russian Allies,

“… you can have the satisfaction of knowing your purchase will help a Cause and people who have helped you by enduring suffering and shedding blood to the death, until you were prepared to strike at the common enemy… Try to remember that when the mighty Nazi Armies of destruction swept into Russia to kill, torture and plunder, the people of this Island were given time to draw breath and immerse into production for equipping a great Army and huge Air Armada with which to stop forever the beasts of war”.

A quick flick through and it is immediately apparent just how hard things were. Without exception, the recipes are frugal. Many are based on left-overs and potatoes feature heavily. Cheese is used sparingly and butter has given way almost completely to margarine or lard. As far as seasoning is concerned, curry powder and mustard are as exotic as it gets. Mrs Clement Attlee offers the reader an unappealing sounding Austerity Christmas Pudding, bulked up with carrot and potato. She is not the only one to add vegetables to her desserts. The Duchess of Atholl supplies us with a recipe for Beetroot Pudding. “This is a useful recipe for beetroot to make a nice sweet pudding with very little sugar”.

Lady Woolton (wife of the Right Hon. Lord Woolton, Minister of Food 1940-1943) somewhat unenthusiastically, I feel, submits a recipe for Potatoes Boulanger, stating “…this is the best way of cooking potatoes. It sounds dull, but I hope it will be of some use in this book. Lord Woolton says more carrots are good for you; but I must say tea is more comforting”. She makes a fair point.

Miss Ellen Wilkinson (Parliamentary Secretary to the Ministry of Home Security) is worth a mention for her haphazard sounding ‘Security’ Hot Pot. She states “I am a very busy woman, so whenever I cook I have to produce something quickly. This dish never comes out the same twice, but it is the tastiest meal I know”. Apparently the procedure for making is to “Cut up anything there is in the larder, as apples, several kinds of vegetables, odds and ends of left-over rations. Put everything all together in a pressure cooker. Add a small piece of margarine or a strip of bacon cut up. Take half a cup of hot water and dissolve a beef cube in it. Pour this over the ingredients and put on the lid. Cook for ten minutes and a hot meal will be ready.” The mind boggles.

Many of the contributors to this book are clearly unaccustomed to cooking. Actress, Dame Sybil Thorndike remarks “I’m really no cook tho’. I struggle! My only real success is this stew. After it is put together I say prayers and results follow”. Similarly, war artist, Dame Laura Knight admits “This recipe has been passed on to me for use. I do not cook, not even an egg…”

Lady Addison, whose activities include being President of the Women’s Institute, District Vice-President of the Red Cross and Committee Member of the District Nurses’ Association is also, we are informed, an Active Assistant in the ‘Village Meat Pie Scheme’. This enterprise, being rather more serious than it sounds, was formed to provide wartime workers, particularly those in physically demanding roles, with a much-needed midday meal.

In the ‘Remarks‘ section, Lady Addison admits that a favourite recreational pastime of hers is to “… contrast the present food situation with that portrayed in books of the last century. Thus – in that delightful American book, The Wide, Wide World, written a hundred years ago, Mr. Van Brunt, in preparing a breakfast for four people told Ellen “to bring him a whole ham and a dozen eggs”… it is pleasant to remember!“

As well as carrying out their official duties, many of the women in this book are contributing to the war effort in more modest ways. Lady Violet Bonham-Carter, Governor of the BBC, Member of Executive of the League of Nations and President-Elect of the Liberal Party Association, has found time to serve as an Air-Raid Warden in the Paddington district of London since 1939. Lady Sinclair of Ulster spends her spare hours engaged in part-time factory work and caring for a roof-top vegetable garden. The Countess Winterton, wife of Parliamentary Member the Right Hon. Earl Winterton, cares for evacuees in her country home and her London house is occupied by families who have been bombed out of their own homes.

To be honest, I didn’t feel entirely enthusiastic about testing any of the recipes in this book, but felt it would be disrespectful not to try at least one. In the end I chose Scottish Treacle Scones, a recipe contributed by Mrs Neville Chamberlain, wife of the late Prime Minister (who declared war on Germany on 3rd September 1939).

Take the flour and knead in the piece of margarine. Add the soda, the ginger, the cinnamon and the sugar. Mix these thoroughly, then stir in the treacle, and add the milk. This should be worked up to a stiff dough. Divide into three portions roll out, but not too thin. Cut into three-cornered pieces, place in greased tin and bake in moderate oven.

Whilst being a little rustic in appearance, they were actually rather good. I am only sorry that butter was so hard to come by in those days because a liberal spreading takes them to another level.

We round off with a (somewhat formal) letter of gratitude from Madame Gousev, wife of His Excellency the Soviet Ambassador to the United Kingdom.

And with that, on an optimistic note, we reach the end of this fascinating little book, knowing that “…one day the food abundance of previous years will return plus new additions, and then these years will fade in memory until of the past will be only our Souvenirs”.

Tomato Soup Cake anyone? Yes, I thought that too,


Error: API requests are being delayed. New posts will not be retrieved.

Error: API requests are being delayed for this account. New posts will not be retrieved.