Many Ways of Cooking Bananas 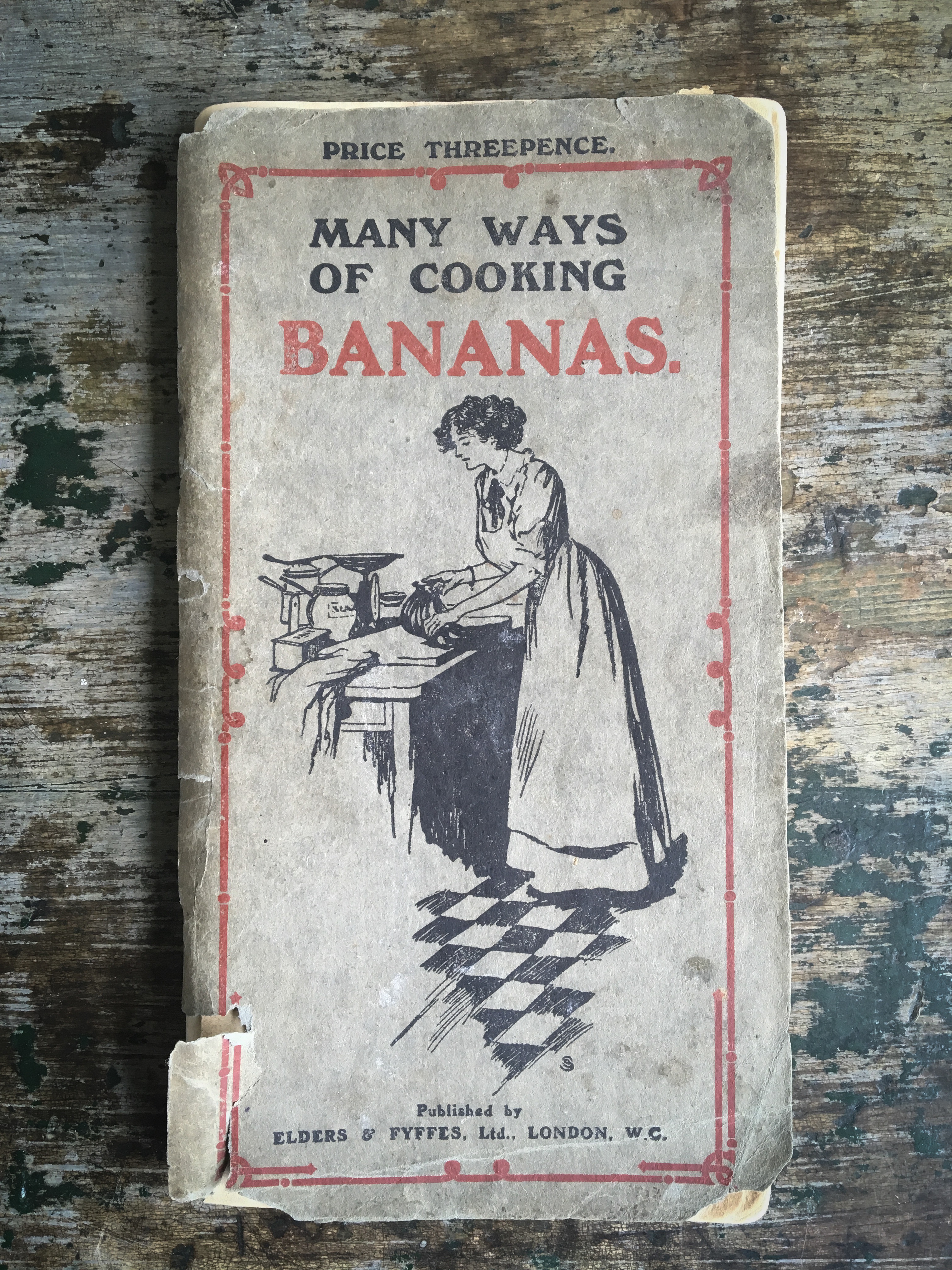 This recipe book was first published in 1910 by Elders & Fyffes, the largest and most well-known importer of bananas into Britain at that time. In the introduction we learn that it came about as the result of a competition, where the company invited members of the public to send in their best banana-based recipes. This fruit, so familiar to us today, was something of a novelty at the time, so it is assumed that the company was hoping to promote the banana to a wider audience.

The recipes are many and varied, about a hundred and fifty in all. Categories include baked and steamed puddings, soufflés, pastries, creams, custards, fritters, trifles, jellies, compotes, cakes, chutneys, savouries and salads.

Being a fan of the banana, I felt it would be a jolly good idea for me to try out a selection of the recipes and bring to your attention some of the most interesting. Weeding out the good ones from the duds was quite a long and drawn-out process as I think it is fair to say that Elders & Fyffes didn’t necessarily go to the bother of testing out all of their competition entries! Neither was much imagination applied when it came to the naming of the recipes (see below)!

However, it turns out that in spite of this, there were some really excellent ones in there! I am pleased to note we are in a time pre-war where ingredients are plentiful and there is a lot of ‘piling on’ of whipped cream and meringue throughout. Interestingly, several of the recipes, particularly the blancmange-style puddings, suggest the addition of cochineal (a red food colouring derived from the Dactylopius coccus insect). Presumably it was fashionable at the time, although perhaps puzzling to us today that a banana flavoured item should need to be coloured pink?

OMG this is the most delicious thing EVER!!! I was worried the rice flour might make it gritty, but my fears were totally unfounded. As with most soufflés, these need to be served as soon as they come out of the oven, or they sink. I made mine in small individual pots and had to have a stern word with myself to stop me from eating every single one of them, then and there.

Mix the rice flour with the milk. Add the yolks and sugar and stir till creamy. Add the bananas, whisk well with a fork, and fold in the stiffly beaten whites of egg. Pour the mixture at once into a buttered soufflé dish, and bake about twenty minutes in a hot oven to a nice brown colour. Powder over with fine castor sugar and send to table at once.

Bananas and cream jelly basically. The texture of this wouldn’t necessarily appeal to everyone but I found it to be absolutely irresistible!

Soak the gelatine in the milk and dissolve over the fire, stirring well. Rub the bananas through a hair sieve till ¼-pint of puree is obtained. Whip up the cream, and add the sugar. Add the puree and some cochineal to colour it pink. Stir in the melted gelatine. Pour into a wetted mould and leave to set.

I really wanted to make this as I like the idea of banana chutney and haven’t tried it before. However, I did have to tinker with the recipe as there were a couple of things about the original that troubled me. 1oz curry powder seemed to be an INSANE quantity, so I went with just a tablespoonful. The same went for the salt, 1 tablespoonful again. I also didn’t fancy the idea of raw onions in my chutney so boiled them in with the bananas for a good half an hour or so. I’m not sure what allowing the final chutney to stand for twelve hours before putting into jars brings to the party, other than unwanted bacteria and organisms, so I put mine hot from the pan, straight into sterilised jars. This turned out to be really good. I still think the onions could have done with being cooked for a bit longer, but aside from that, the flavour was wonderful and this would be a superb accompaniment to jazz up all manner of dishes.

Peel the bananas and cut in pieces. Simmer in vinegar till soft and pulpy. Add sugar while hot. Leave to cool. Chop the onions and sultanas very finely, and when the bananas are cold mix everything well together. Allow to stand for 12 hours, then tie up securely in jars.

This is truly delicious, a Queen of Puddings of sorts, but in banana flavour. Eating it from a scallop shell, whilst novel, did slightly set my teeth on edge though.

Butter 6 escallop shells which have been well washed, sprinkle with bread crumbs, then one banana sliced for each shell: add a little grated lemon peel, cover with bread crumbs. Then take the yolks of the eggs and milk, sugar to taste, well beaten together, pour a little over each, sufficient to moisten the breadcrumbs, bake in a moderate oven for 20 minutes. Whip the whites of the eggs till quite stiff, dredge with castor sugar, pile high, return to the oven to set the whites. Before sending to the table garnish with glacé cherries.

The final, and possibly the most bizarre recipe in this book. I just had to include it because it is so odd! I can’t say I liked it but it is one of those things where you keep having another mouthful, just to make sure…

Select large ripe bananas, one for each person, peel and place on a lettuce leaf. Cover with a good mayonnaise dressing and sprinkle with English walnuts, chopped fine, and serve at once. This is a delicious dish.

I don’t think this is the last of Edwardian cuisine for me! In general, the recipes I tried were really excellent and it is clear the Edwardians definitely knew a thing or two about good food!