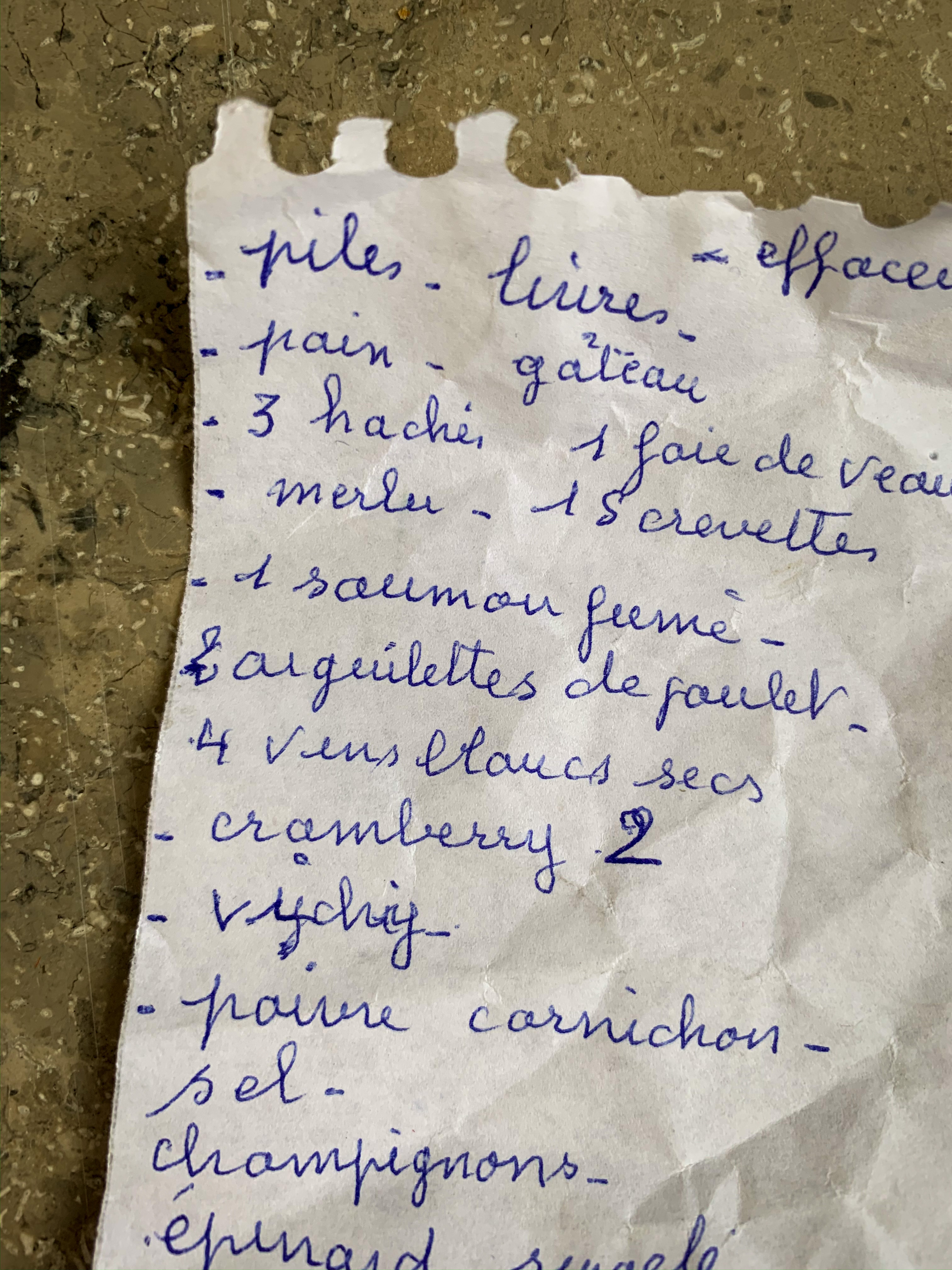 This crumpled up, abandoned shopping list was languishing in the bottom of my trolley in Carrefour the other day and for some reason I felt compelled to take it into my possession. I find it to be an intriguing snapshot of somebody else’s life and have been wondering about the individual who penned it.

To my mind, this is the work of a female who loitering in the middle-aged-to-mature category. The handwriting is of the time-honoured French curly wurly variety and the contents are traditional and unextravagant.

With the exception of a few random fruits and vegetables, the list has sensibly been written in the order that one reaches the items as one navigates the aisles. Madame X is clearly of orderly mind. We start with batteries, reading books and an eraser. Well, let’s face it, no trip to Carrefour is complete without a peruse of the stationery section. I wonder if she’ll be tempted to go ‘Off List’ though.

If she’s anything like me she’ll need to adopt a will of iron in order to avoid filling her trolley with fruit-scented Stabilo felt tip pens and irresistable notebooks of lovely French-lined paper. Actually no, she doesn’t strike me as the sort, but maybe she’ll give in to the temptation of a Johnny Hallyday 2020 wall calendar, several dozen of which can be seen stacked precariously in the ‘Prix Choc’ section today. Is she even a fan of Johnny Hallyday? Most definitely she is.

OK, now on to the food. Bread, compulsory with every meal on any French table. What will she choose? A baguette or a pain rustique, of course, but maybe she’ll treat herself to a slightly fancier pain au noix too, or some pain de siegle to pair with her smoked salmon? Next, cake. I rather expect she is after a traditional Galette des Rois. Whoever gets the slice with the fève in becomes king or queen for the day (paper crown conveniently included).

Onwards to the meats and fish. Steak hachés, calf’s liver, hake, a very specific fifteen prawns (king-sized presumably) and a couple of chicken breasts. Surprisingly there is no mention of oysters on her list. Their role is of such importance in French New Year’s celebrations that a great chunk of aisle usually occupied by vegetables has been vacated in order to accommodate them. Maybe Madame avoids oysters, fearful of their potential aphrodisiac effect on Monsieur X (what with his weak heart and everything).

Drinks next. Four bottles of dry white wine, Vichy water and some cranberry juice. The Vichy water confirms my fears over Monsieur X’s precarious cardio-vascular situation. It is well known for its cholesterol and heart-disease lowering properties and I am touched to see that Madame, generally quite frugal with her purchases, is happy to pay that bit extra to keep Monsieur in good health.

Off now to the condiments section for pepper, salt and cornichons. Is she thinking of making a Sauce Tartare to accompany the hake? If so, I’m assuming she has capers at home already? Pan-fried hake with prawns? Again she’ll need capers. I’m worried about the capers. Her menu plan could go completely awry if she gets home and finds she doesn’t have any.

Next she’s headed for jam and eggs. I confess this leaves me slightly disillusioned. I had imagined Madame to be queen of the kilner jar, churning out conserves, preserving fruits and pickling vegetables harvested from her large and productive potager at every available opportunity. In my imaginings she has no need for shop-bought jam. Monsieur X, in his compulsory blue work overalls, can be found slaving there at all hours, occasionally chucking a worm in the direction of their motley crew of noisy and quarrelsome, but prolifically egg-laying chickens.

I digress. Onwards to dairy. Milk – probably of the UHT variety, in cartons. Why the French, in all their culinary excellence, seem to favour this product above fresh milk will be forever a mystery to any British consumer. Madame X is clearly in two minds about the butter – is she thinking of Monsieur’s heart again? It is written down but then crossed out, only (thankfully) to be reinstated later on.

We are next hit with the craziest item on the list. Eight chocolate dairy-free Sojasun desserts. I wonder why she needs so many? Particularly as she is also buying a selection of mixed yoghurts. Is poor Monsieur X dairy intolerant as well? That would explain why Madame opts only for goat‘s cheese when she hits the fromage aisle.

Pot au feu. Does she mean a ready-meal pot au feu stew? If so, I am disappointed. I had Madame down as a woman who always cooks from scratch.

Vegetables next. Potatoes, mushrooms, frozen spinach, garlic and parsley. She has almost certainly ear-marked these to serve with the calf’s liver. A tempting mushroom sauce and puréed potato perhaps? Or will she go alla Veniziana, on a bed of buttered spinach? Either way I think Madame will nail it. A simple salad of cucumber, doucette leaves and endives will undoubtedly be served on the side, dressed with Madame’s outstandingly good home-made vinaigrette, the recipe for which is a fiercely guarded family secret passed down from her great-grandmother. Madame’s fruit requirements are simple. Festive clementines, one bunch of grapes and a lemon.

And so we arrive at the the final item on the list. A clothes brush. Madame may dress more for function than fashion these days, but true Frenchwoman that she is, she always takes great pride in her appearance.